Dillon is a little town in the valley between two mountain ranges in the south western most corner of Montana.

My daughter Meredythe and her husband Joey Wedding are there for a six month winter. They went out in the woods and cut down their Christmas tree.
Pretty good deal, HUH?

So……..I’m going to show you their special Christmas decorations there in the beautiful snow covered Rocky Mountains. 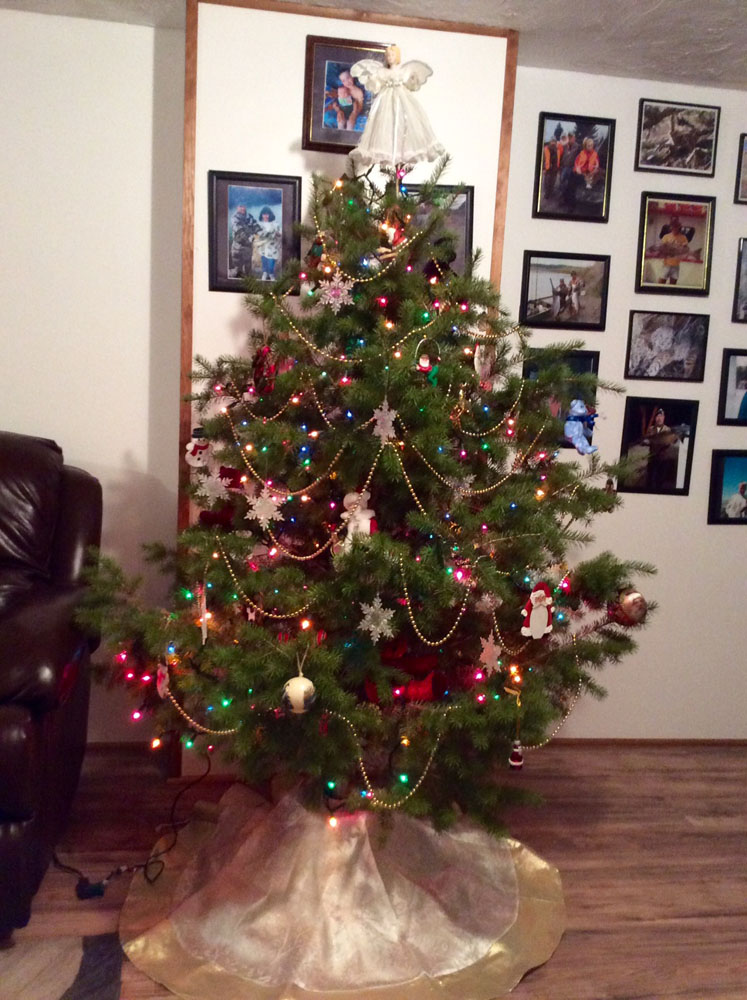 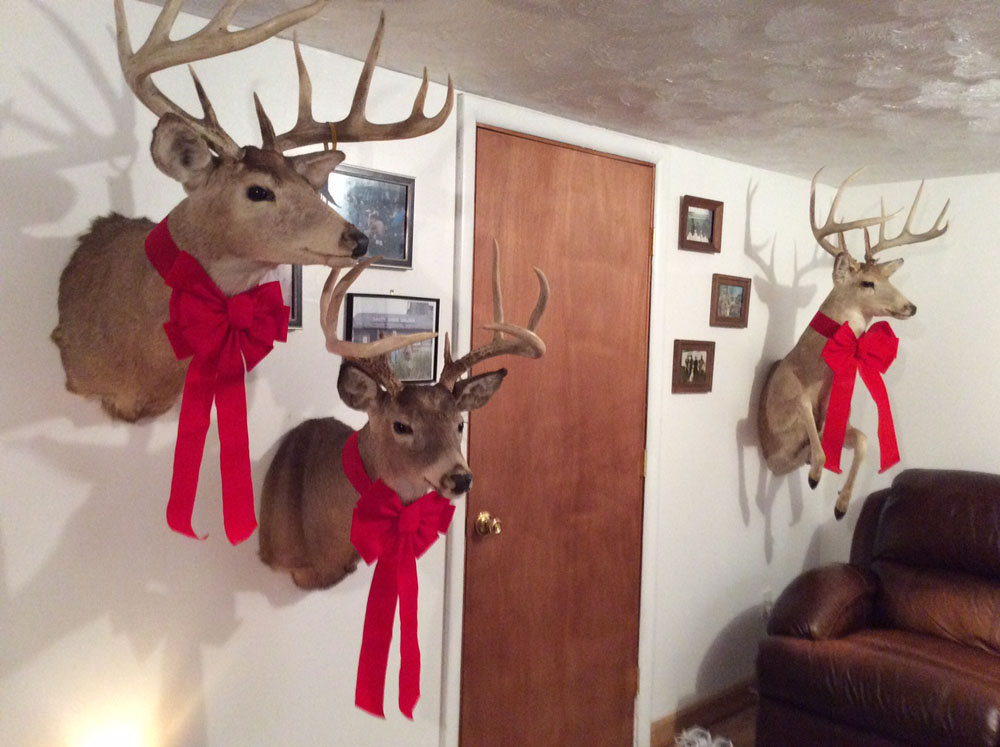 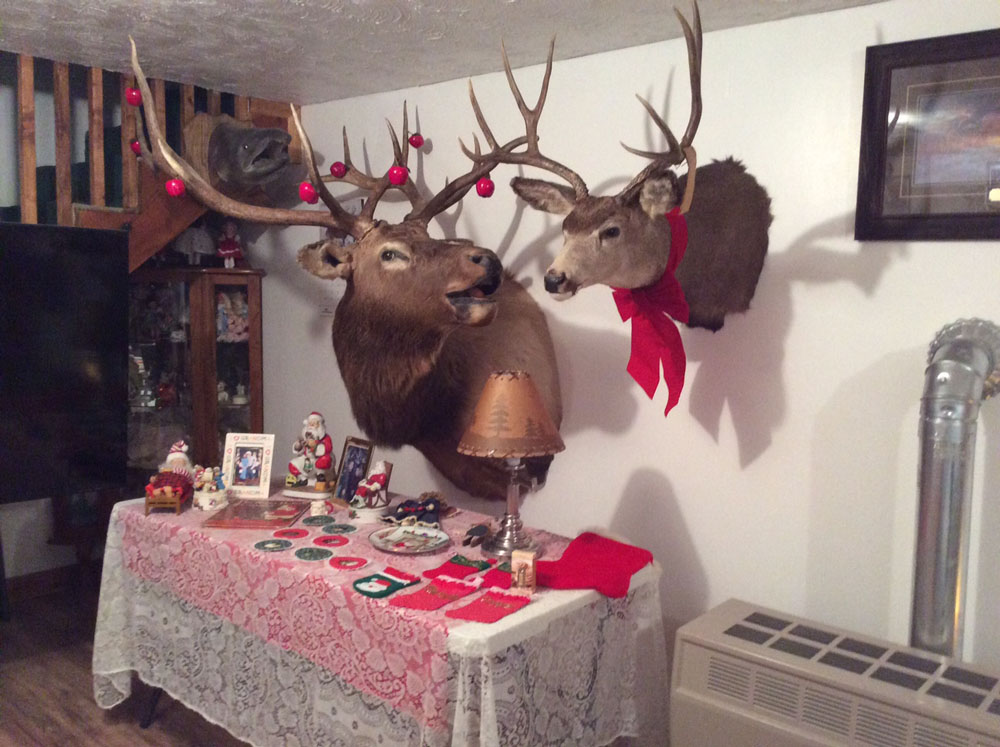 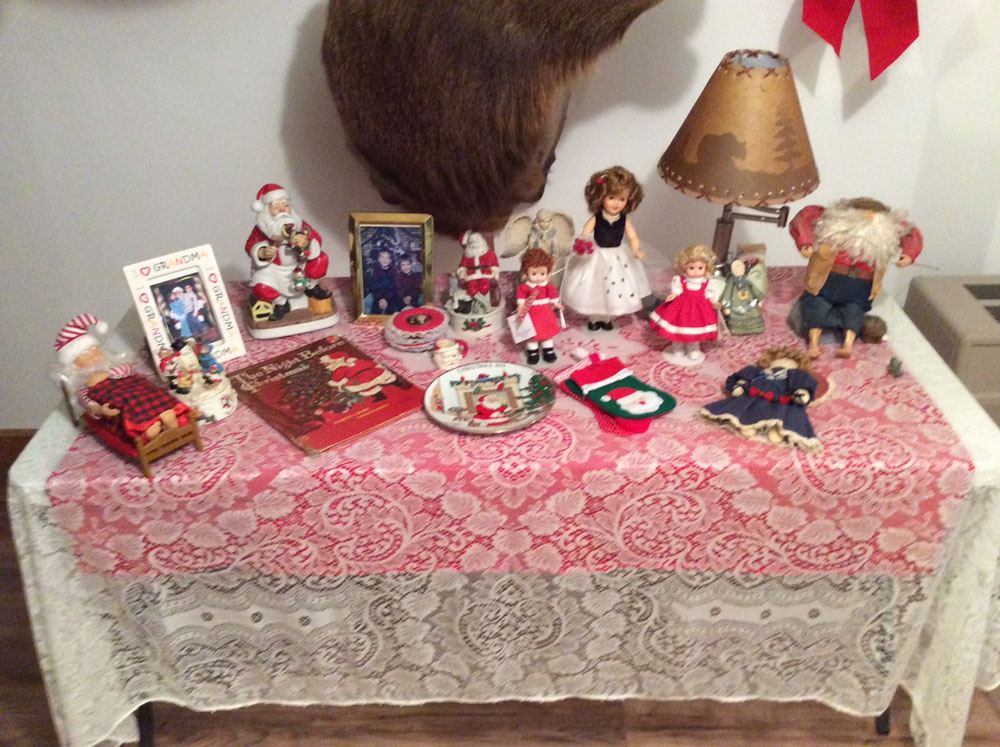 Meredythe’s collection of treasures. A very old Shirley Temple doll, two Madame Alexander dolls, the Christmas plate in center of the table a treasured gift from her sister Carole Suzanne Smith (Susie) who we lost with cancer.  Meredythe said she is going to put cookies on that plate. Maybe Orange cookies with orange icing. YUM! YUM! 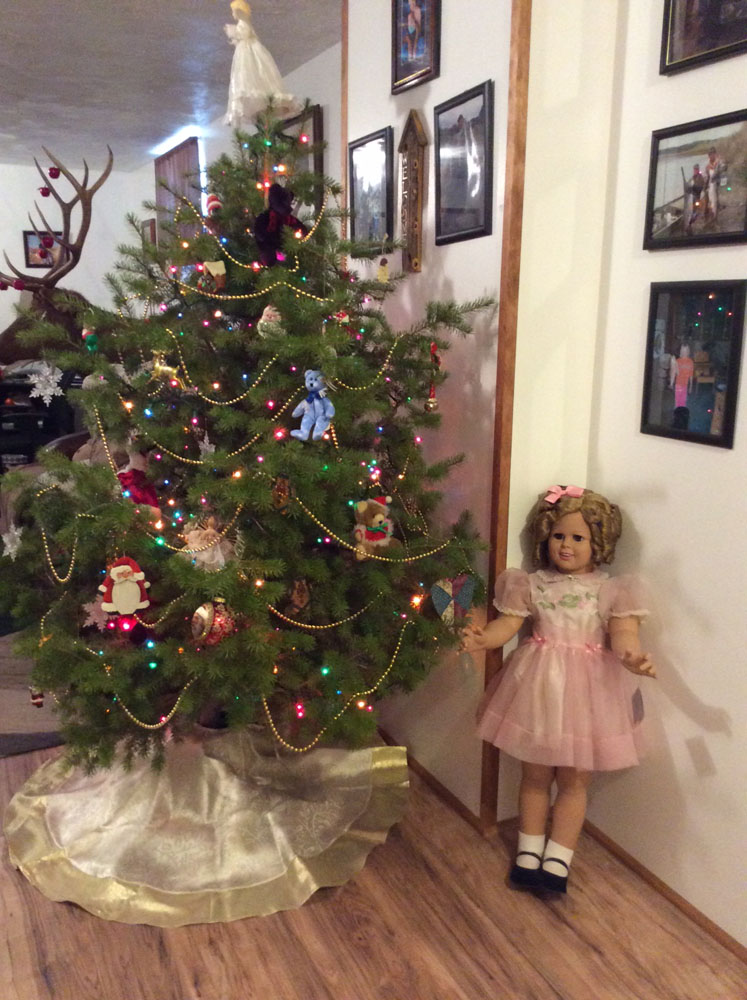 Looks like a little girl standing there doesn’t it? It is a large Shirley Temple doll from my collection that I gave to Meredythe.

This is my Christmas in Montana story especially for you. Hope you enjoyed!

Oh the turkey’s roasting and the pies are baked ”tis glad Thanksgiving day.” So let’s have a look-see at our turkey Tracy, our super chef, just took from the oven. YUM! YUM! 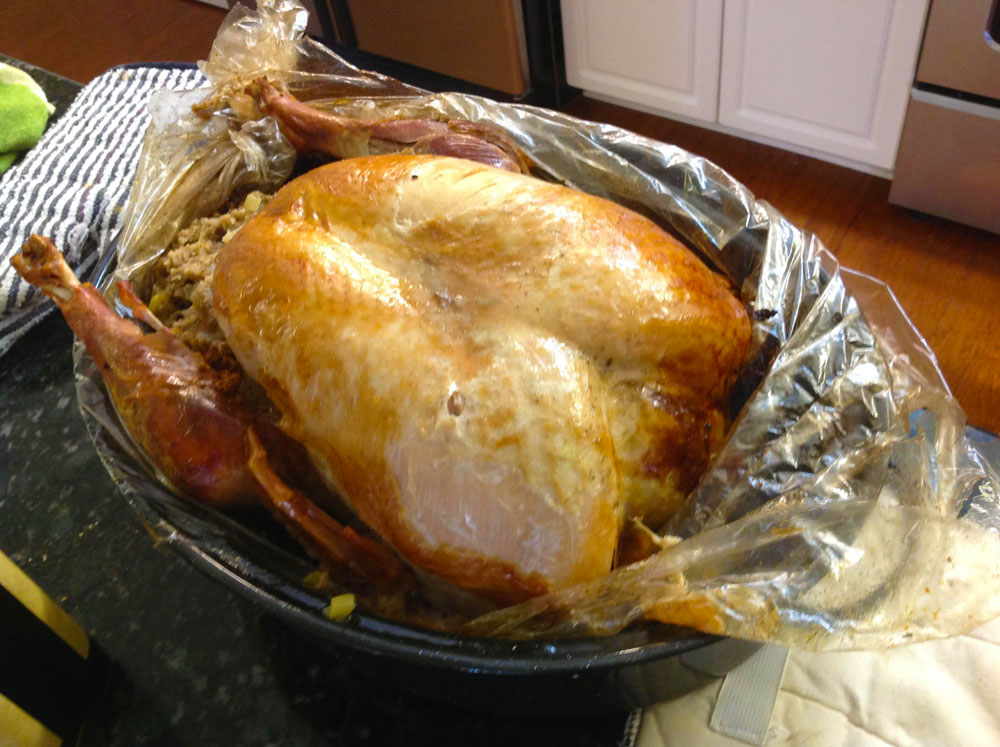 My son-in-law Tracy Drake filled the turkey with oyster stuffing, I had ask for it,  placed it in a bag and baked it for three hours. He also made a corn casserole, a green bean casserole, corn bread and gravy. 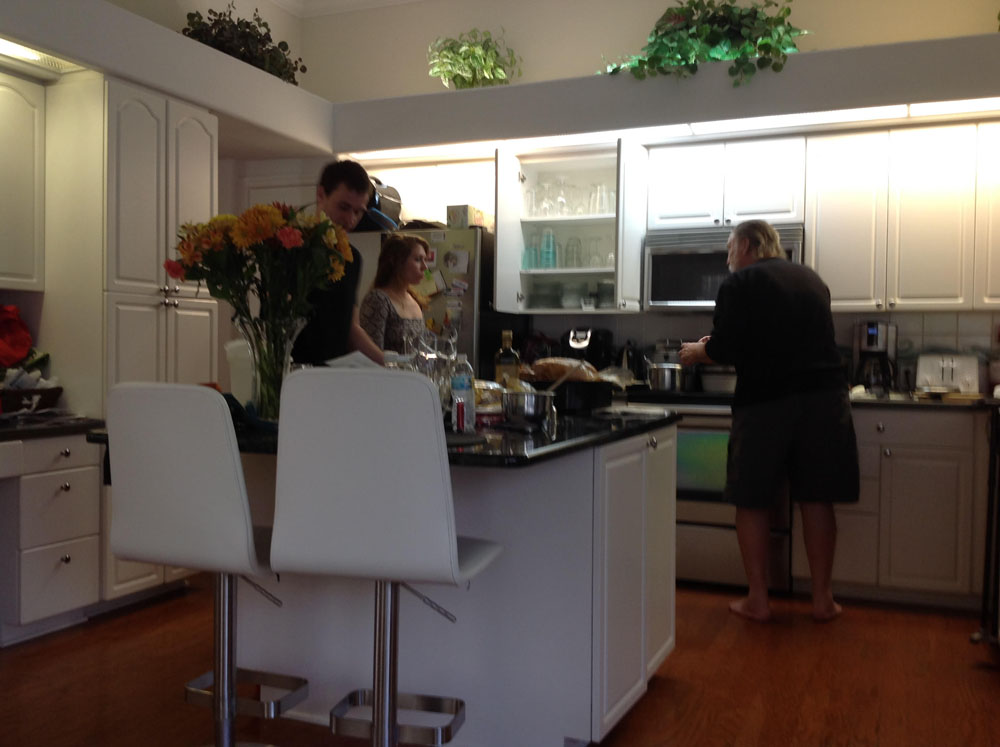 Tracy and Sarah, our families super chefs, with final details as we all look on with the delicious aroma wetting out appetite. 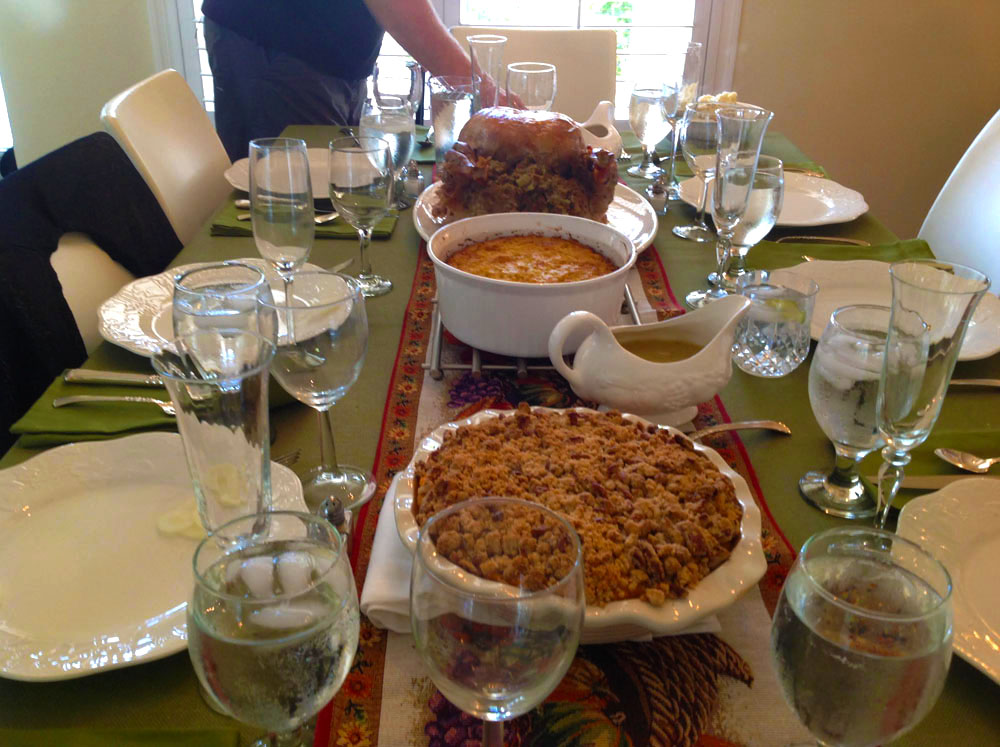 And my daughter Pamela Drake set the beautiful table. Still more food to be added. And we all sit down to the table to rejoiced in that delicious feast. AND………IT WAS A DAY TO BE TRULY THANKFUL FOR FAMILY AND ALL LIFE HAS GIVEN US.

On my father’s orders his working men scrambled to get truck loads of sand and burlap sand bags, hurriedly filling them and closing off the road over to the high banks around the quarry.

Because……….they had to stop that roaring creek water from flowing into the quarry and filling it with water. That would be a catastrophe.

But it kept raining and raining and despite all those men’s furious work to block that rushing, rising creek water we watched as it broke through the bags and rapidly flowed into the quarry. As it continued, it filled the quarry…………………

That put THE ROCKHOLD STONE QUARRY out of business! A VERY SAD DAY…………..

Now, what to do? That’s right! A sump-pump would have to pump that water over the bank surrounding the quarry along Bokes Creek and put the water back into the creek. I don’t remember how long that took but that time was lengthy.

So again as when Old Doc Thompson had put the quarry practically out of business for a couple years we lived the same this time.

When someone ask me “How could you live without any income” I told them “We lived off of what we had”. To someone who knows only living on a paycheck each week that was probably difficult to understand.

Well… to be sure,,,,,you tighten your belt…to manage getting by during the time of recovery when you are again back in business.

But believe me when I say, as we watched that roaring creek water fill the stone quarry with water IT WAS A VERY SAD DAY!!!!!!!!!!!!

I have to hand it to Salem Ohio hospital for their SPECIAL NURSING for getting their patients ready to take care of themselves while living alone when returning to their homes.

After about ten days in the hospital we are taken to the SPECIAL NURSING section where the they have an exercise room and full kitchen combined. We patients    were taken there each morning.

Besides the nurses putting us through many different exercises, while there we also did some food preparations. I found it interesting watching this one elderly male patients peel potatoes. Another patient preparing other food.

I felt very fortunate that my job was to make cupcakes according to a recipe by the cooking nurse.

First as per her instructions I used a yellow cake mix to make cupcakes. As soon as they cooled to room temperature I punched tiny holes in each of the cupcakes and filled them with cherry jello using a teaspoon to drizzle the liquid jello over the cakes.  Then into the fridge to cool. And I should tell you….the hospital furnished all the food supplies.

So………when they were chilled the kitchen nurse got a tube of whip cream brought in from the hospital main kitchen and I topped these cupcakes with whip cream.

And here is my finished prize………. 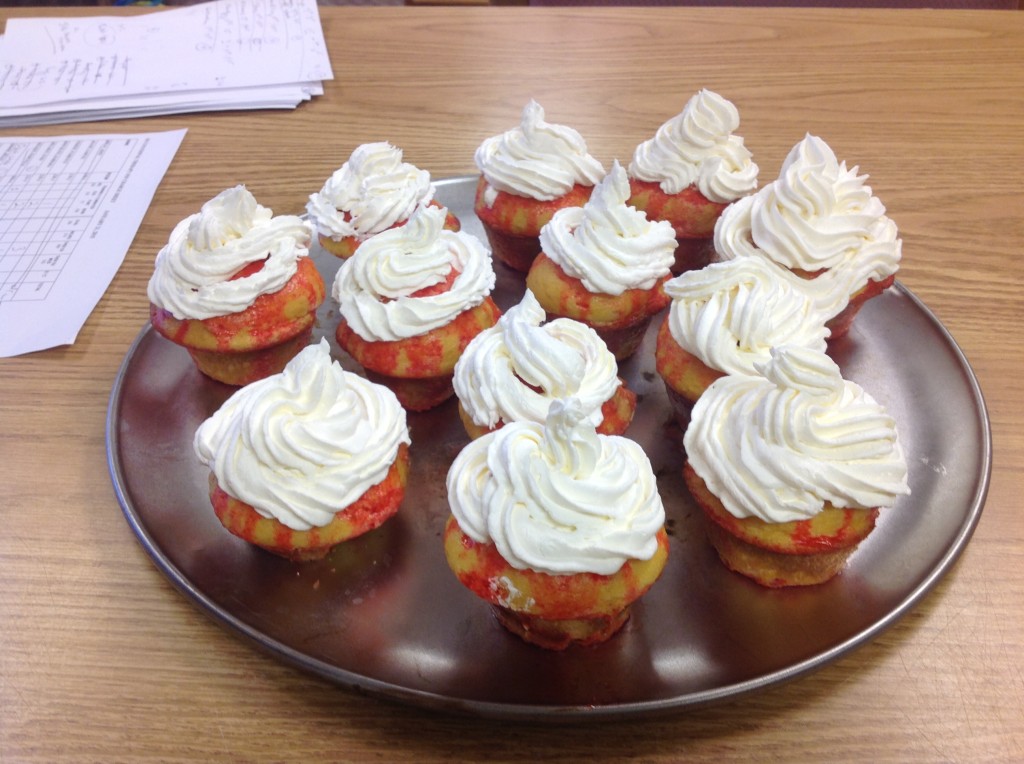 And …….others there along with me enjoyed these delicious fruits of my labor. This was over a year ago.

But you know what????? Finally……I am going to purchase a Duncan Hines yellow cake mix, a box of cherry jello and a can of whip cream.