Many lovely people lived in Highland Creek condominiums Salem Ohio and were my friendly neighbor’s the 10 years I lived there from April 25 2006 until September 10 2016.

Wilma and her husband Robert Grams came to my door with a 100 year old doll given to them by his Aunt. It was “Flo, will you make a new dress for this doll?”

I showed them beautifully dressed dolls from a doll magazine I had and ask them to show me a doll dresses they liked. Robert picked his choice. We went together to a store to purchase the materials and trimmings I would need that cost considerable and they paid the bill.

I cut my pattern from tissue paper and made the dress. I cut a pattern for a ruffled half slip and pantaloons that came with three rows of ruffled lace to below her knees.

I followed with a big brim bonnet and booties lace trimmed and ties with satin ribbon. I placed a flower on the brim of the hat and tied it with a satin ribbon.

As I made each of these items I found I needed things and trimming, lace, satin ribbons the flowers for the hat that we had not purchased but I had these items in my box of sewing supplies so I added my own things to my sewing to give everything that professional look.

And this is my finished project: 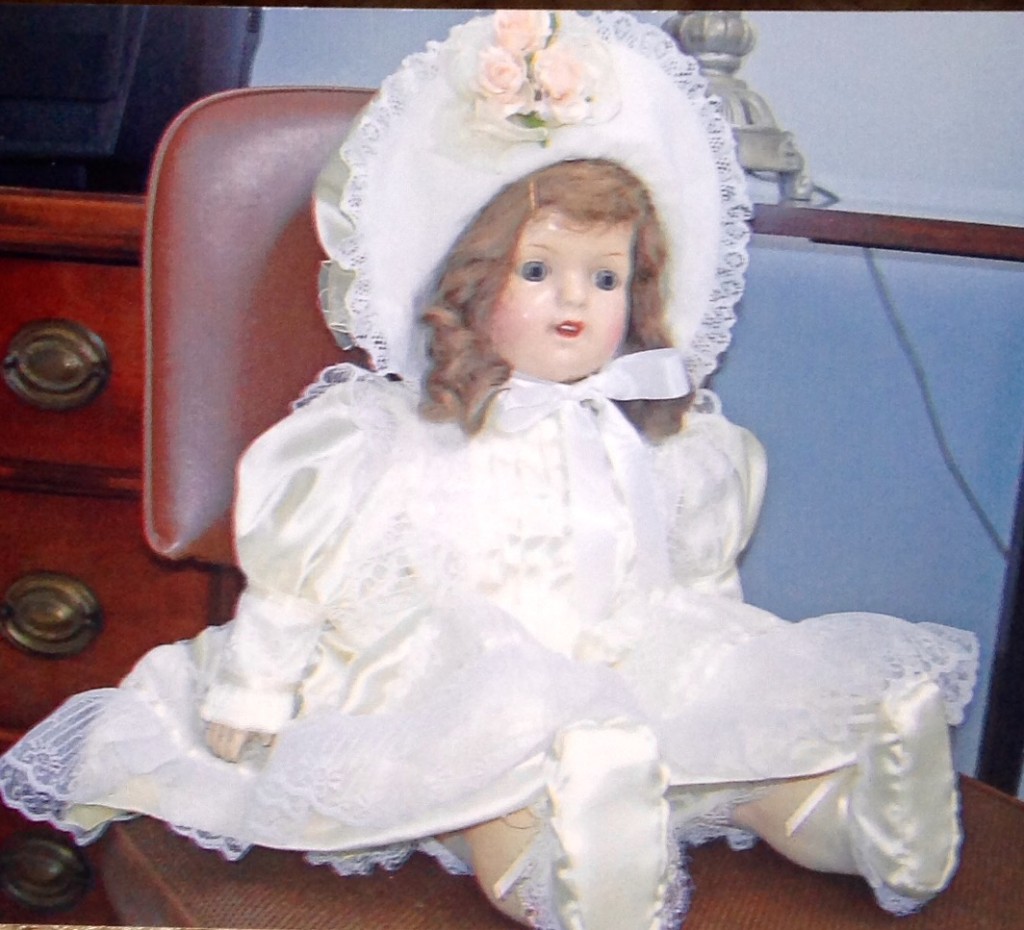 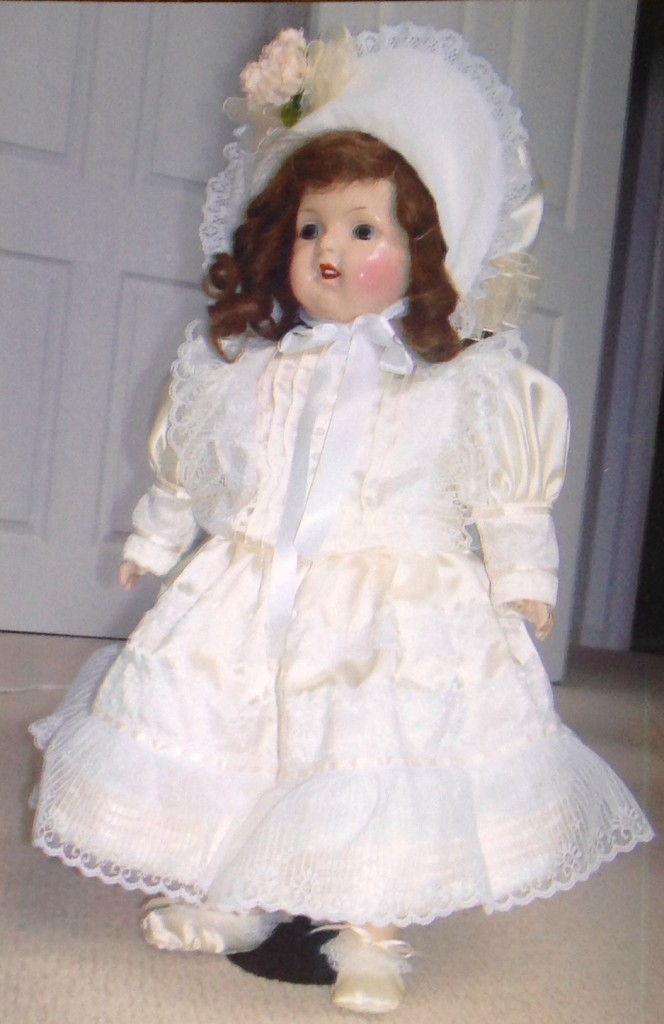 Wilma and Robert were delighted with how beautiful their 100 year old doll now looked. Wilma purchased a white knit baby blanket to wrap her. They were taking Roberts Aunt to a Florida vacation and brought her to my home to meet the person who had dressed that doll. His Aunt was so pleased to meet me and told me how she loved the way I had dressed her doll.

And SURPRISE….. they wrapped the beautiful knit blanket around the baby doll and……………

While I was working almost day and night (it seemed like) in Venice Florida selling Real Estate, I received an invitation to attend my sister Geneva and her husband Bill DeWitt’s 50th wedding anniversary party in Ohio.

After thinking it over I decided I could spare a weekend and go so I purchased a flight up on Friday, go to the party on Saturday and fly home on Sunday. And that is what I did. 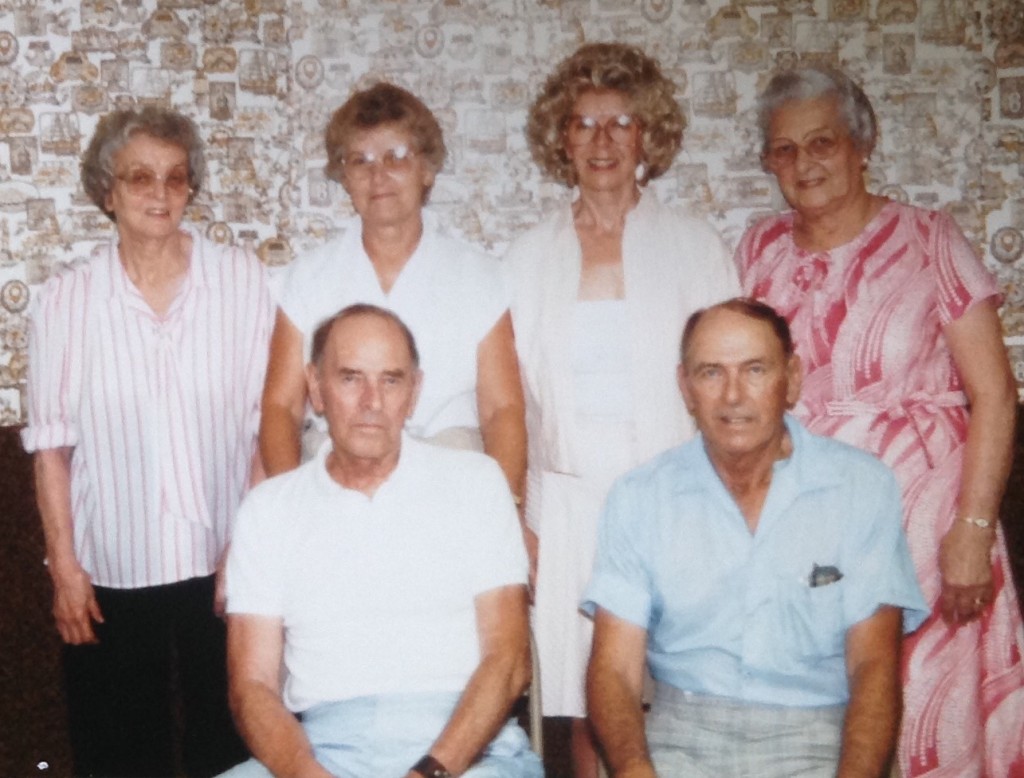 Edna, Fannie, me, Geneva, Burl, Bugs
Family who were there for the party

It was several years after that Geneva called me and ask if she and Bill could come down and stay in my home for a vacation.

I said “I would be delighted and you can stay for TWO week instead of one if you would like.”

My answer to that “Two weeks would not be worth the price of a plane ticket”.

“Well….how long do you want to stay?”

She came back with “The month of February “. 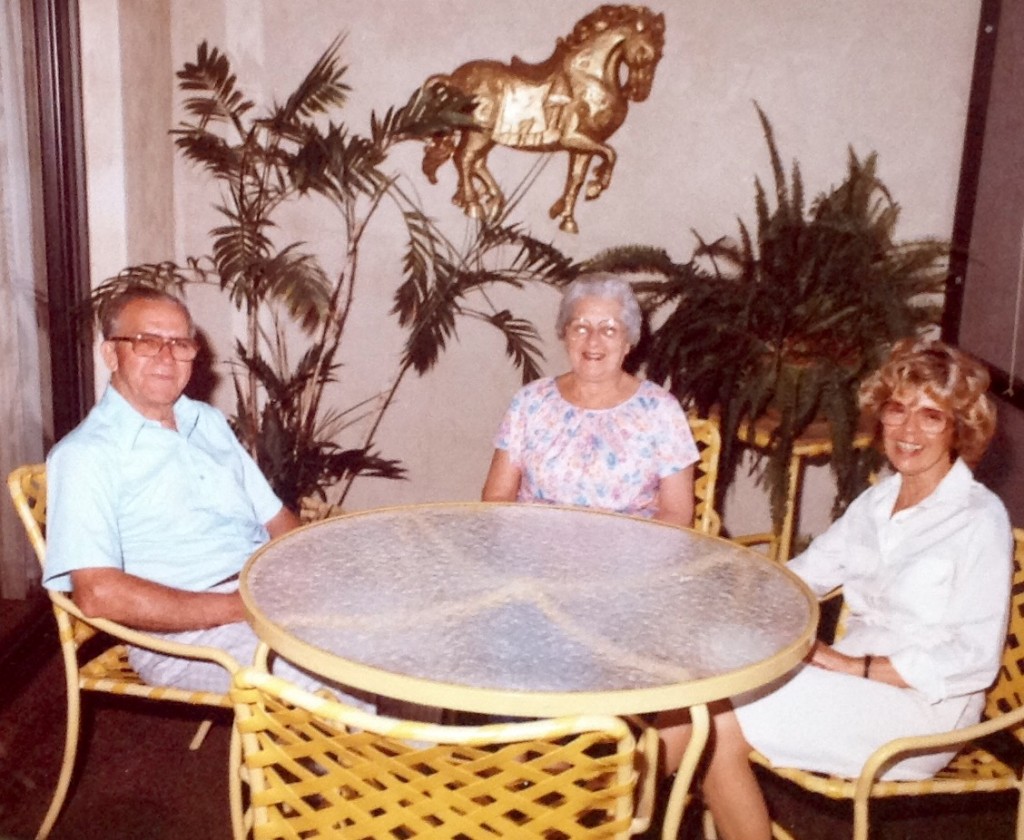 Bill, Geneva and me on my lanai in February

AND SO IT WAS WORTH THE PRICE OF A PLANE TICKET!

From before I was five years old I lived with brothers and sisters in the house beside my Father’s fourth and largest stone quarry, while my parents along with baby brother Bugs lived on a farm seven miles away.

At this tender age I learned fast that I had to lookout for myself. My sisters Fanny, Bobbie and Edna were all busy doing their own thing. So it took my older sister Mable to look after me along with my brother Ernie who was just two years older than me.

My first year of school, while my parents and little brother Bugs (Howard) were spending the winter in California, to keep me warm walking to school in the snow Mabel would put a big sweater of hers on me, roll up the sleeves to my little wrists, lap the front of the sweater  over to fit up close around me then she took a big, long knit scarf and wrapped that around my head, neck and shoulders and all around my little body to keep me warm.

Miss Beatrice Drake, my first grade teacher would wrap me all up again to walk home the end of the school day. She was also my second grade teacher and a real sweetheart. I really adored her.

A little side line story:  In miss Drake’s second grade class she ask us all to write our numbers 1 to 100 and see who finishes first. I’m looking all around the class for someone to whisper to but I see much to my dismay that every one but me are writing as fast as they could.  Well……..I guess maybe I should start writing my numbers also. OK….so here goes. And what do you know I finished first. I was as surprised by that as everyone else.

Now back to the drawing board:

I didn’t have a winter coat until second grade when my sister Geneva, who was married, cut down an old dark blue coat of some adult and made a coat for me.

Of course I wore long underwear with long stockings pulled up overtop and brown hightop shoes. And as I trudged along through the snow up to the corner store and turning on toward school I did keep warm thanks to my substitute mother, my sister Mabel. 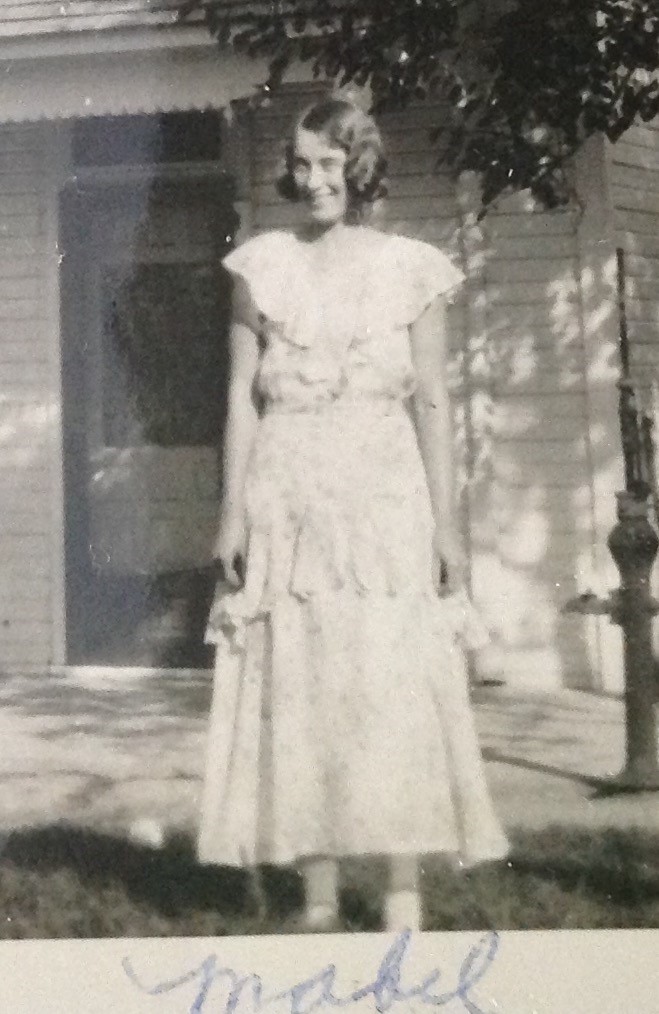 The above picture is of Mabel while she still lived at home.

By the time she met and later married Mitchell Eastman I had grown up enough to take care of myself although I was still only a child. All through the years we remained best of friends. 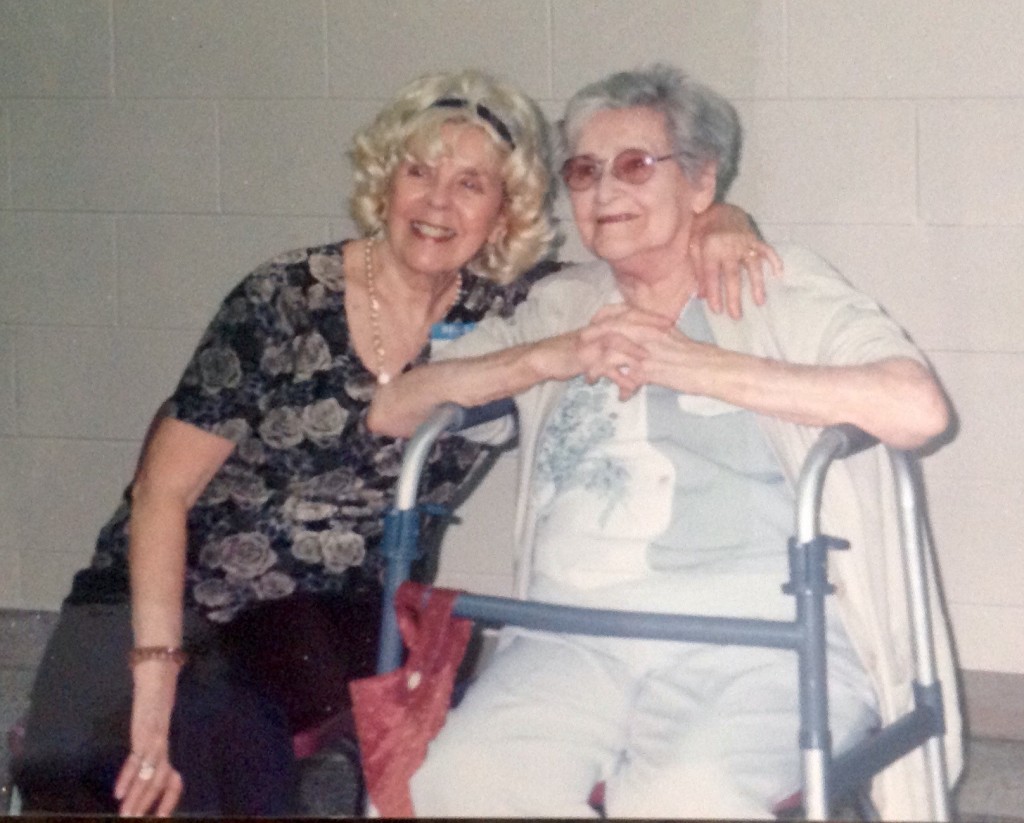 Mabel and me at Rockhold reunion

Her last few years she was in a nursing home in Maysville and each time t flew up from Florida where I lived I would go visit her there at the nursing home. I found if I would send her cards often she then got a lot of good attention from the girls who worked there. In fact one of the girls a few times purchased a greeting card and wrote me a note from Mabel on the card. They pinned my cards up so she could continue to see them.

I mailed her many greeting cards often and would fill a large Christmas sock with gifts and send her for Christmas. I included box of my home made fudge that she loved. My brother Bugs would take it home from Florida just before Christmas and he personally took it down to the nursing home and gave her. It was the least I could do for her for her kind heartedly being my substitute Mother and taking care of me when I was very little.

Through the years we always remained the best of friends until she died at age 98. This story is my tribute to MY WONDERFUL SUBSTITUTE MOTHER. 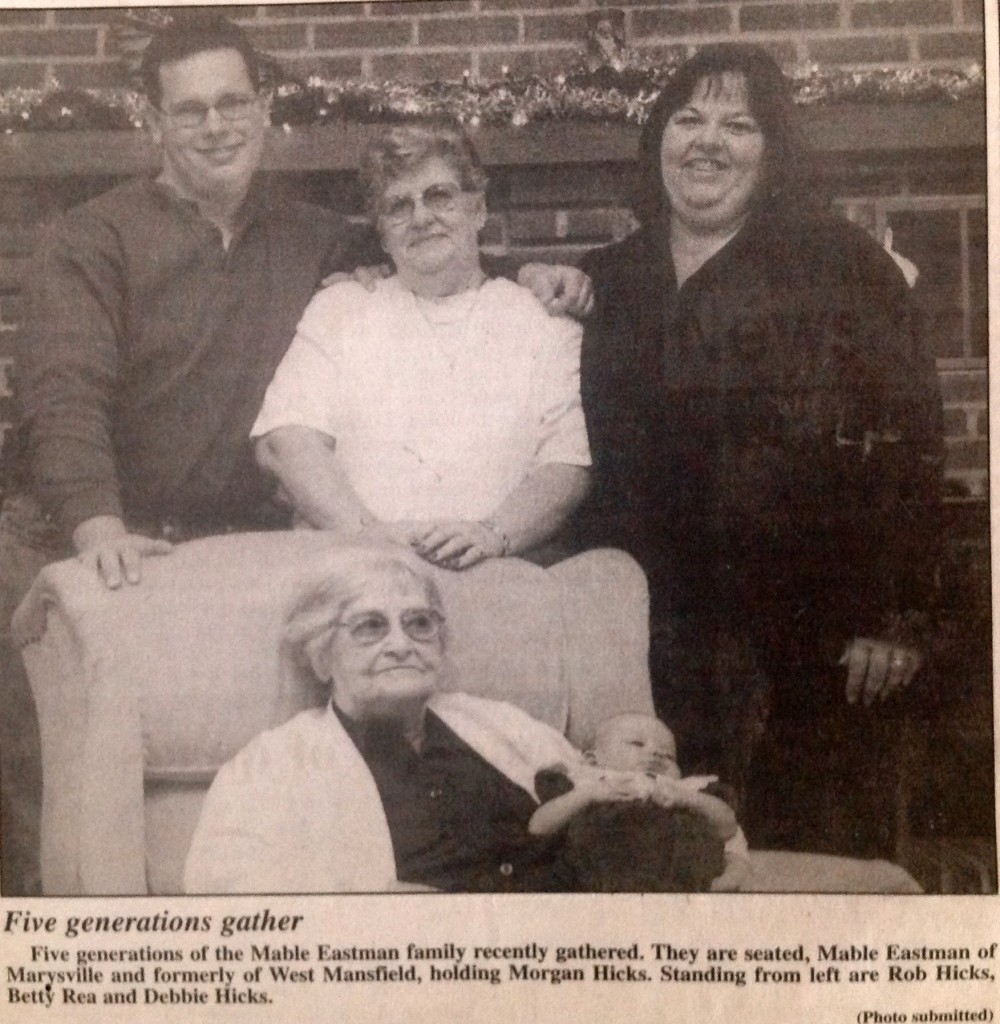 The above picture appeared in the Marysville Tribune news paper Marysville Ohio.

If cake batter is too thick add 2 or 3 tablespoons water or enough to give it a good consistency. Place in 9 x 13 greased baking pan. Bake at 3:50 until just barely done. Over baking takes away flavor.

When cake has cooled make the icing.

In small sauce pan melt I stick of butter and add one cup brown sugar.

Boil 2 minutes on low heat stirring constantly with wood spoon that has a flat end.

Remove from burner, add one fourth cup milk and bring to a full rolling boil.

Remove from heat and allow to cool to 120 degrees.

Add vanilla and stir in 2 cups confectioners sugar. Beat by hand until ready to spread on cake right in the pan you baked it in.

Now enjoy the fruits of you labor with a hot cup of fresh made Starbucks coffee (find it on your grocers shelf!) YUM!!!! YUM!!!!!