In my search for ancestors, from Nannie B Nimmo who wrote “The Rockholds of Early Maryland” I learned that Robert Rockhold the son came to America from Fitzhead England in the year of 1634. His father also named Robert Rockhold remained in England.

(1) My many greats grandfather Robert, the son, married Sarah Greniffe and they had a son John Rockhold.

(3) Charles Rockhold married Elizabeth Wright and their son John Rockhold was born in1711 in Maryland.

(8) Elisha John Rockhold married Elizabeth Louisa Miller June 13, 1858. They both died in Union County Ohio, they were my grand parents on my father’s side. 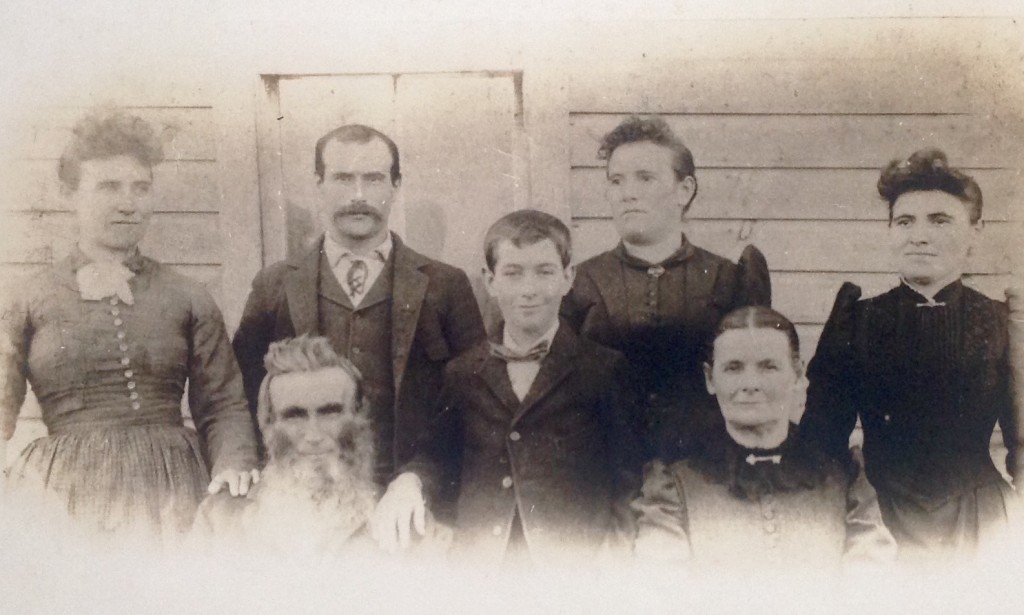 My father Levi was 17 years old when his mother Louisa died. Louisa was 40 years old when my father was born the baby of the family . His sister my Aunt Mary Matilda Bowen told me since he was so much younger than his siblings they had all spoiled him. 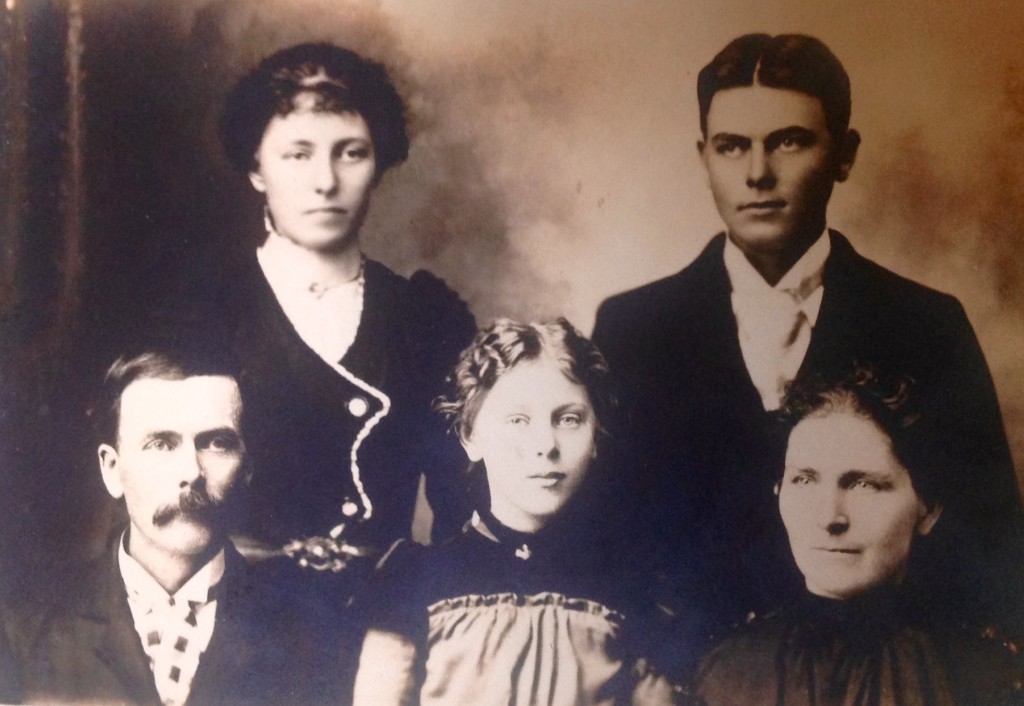 Levi and Mary Etta Rockhold had over 50 grandchildren. So to those of my nieces and nephews who are still living this is how you got to be AMERICANS.

I’m PROUD TO BE AN AMERICAN land of the USA!!!!!!!!! It was just 14 years after the Famous MAYFLOWER ship LANDED IN Massachusetts that our many greats grandfather Robert Rockhold landed at Baltimore Harbor.

When my granddaughter Evin was in school her teacher ask whose relative came to this country first and she was the one whose relative did. In fact HER MANY GREATS GRANDFATHER CAME TO AMERICA log before anyone else in her class.

If you do a search of you ancestors you may find a grandparent who came to America way back when…………….

He had such beautiful long curly hair no one wanted to cut it so my brother Ernie at age five was  still running around every day looking like a beautiful little girl. 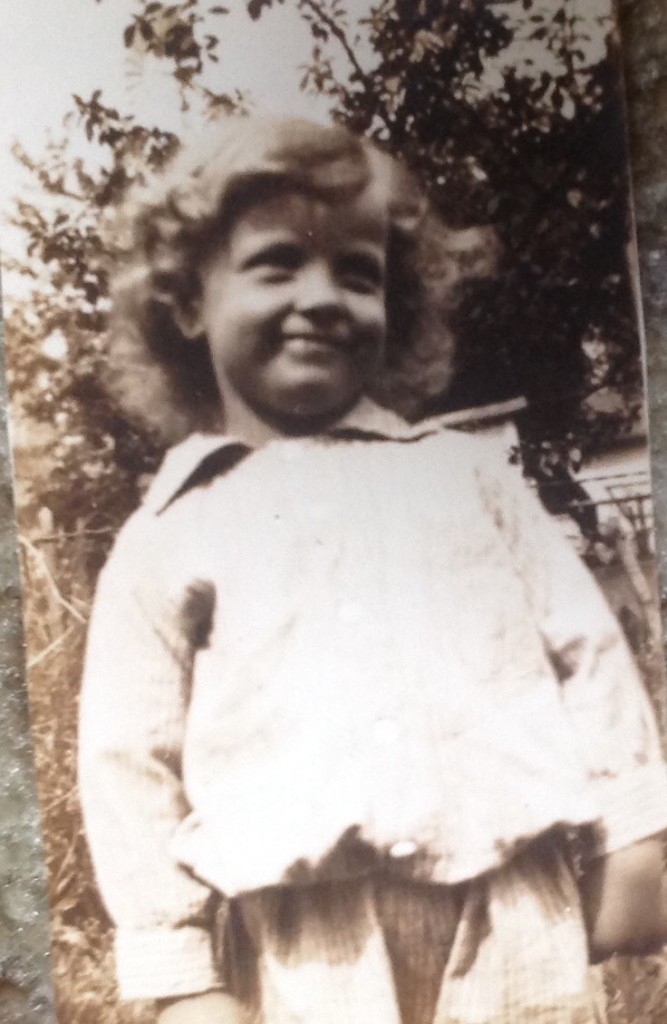 It was a very difficult decision to finally make, to cut off  those beautiful curls. But in all fairness to this little boy they had to break down and finally say………..ok! It’s time.

No one ever told me who did the honors but I know my sister Geneva used to cut hair so it is possible she did the honors. Anyway you gotta see the results. 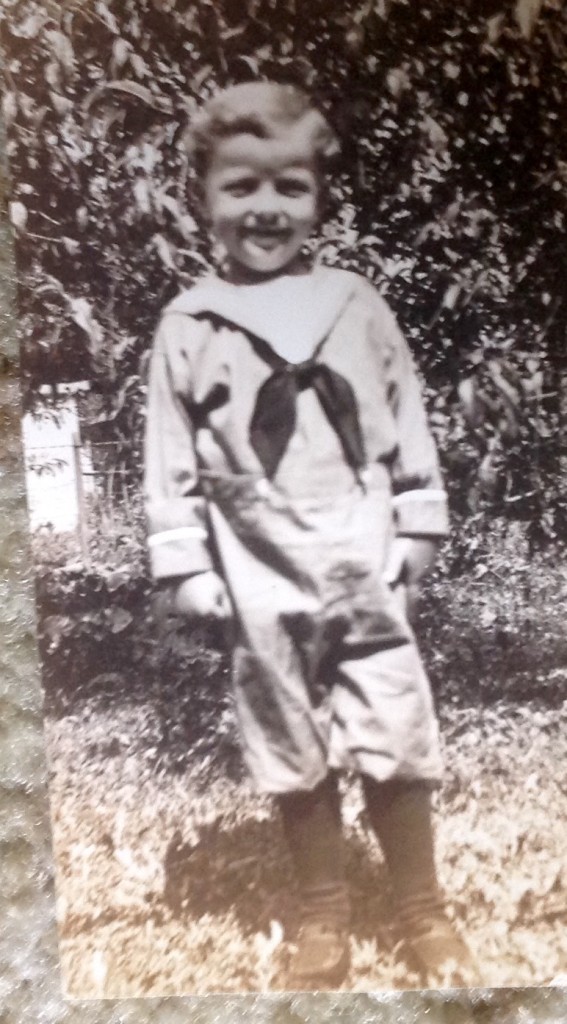 I want to start by showing you a picture of the handsome young man in Ohio who works with my grandson Matt Bender and puts my blogs on line for me. I type my stories on my IPad, place the pictures and then Email the completed blog to him in Ohio. I have to have someone smarter than me put   them on line for me. He is my angel!!!! 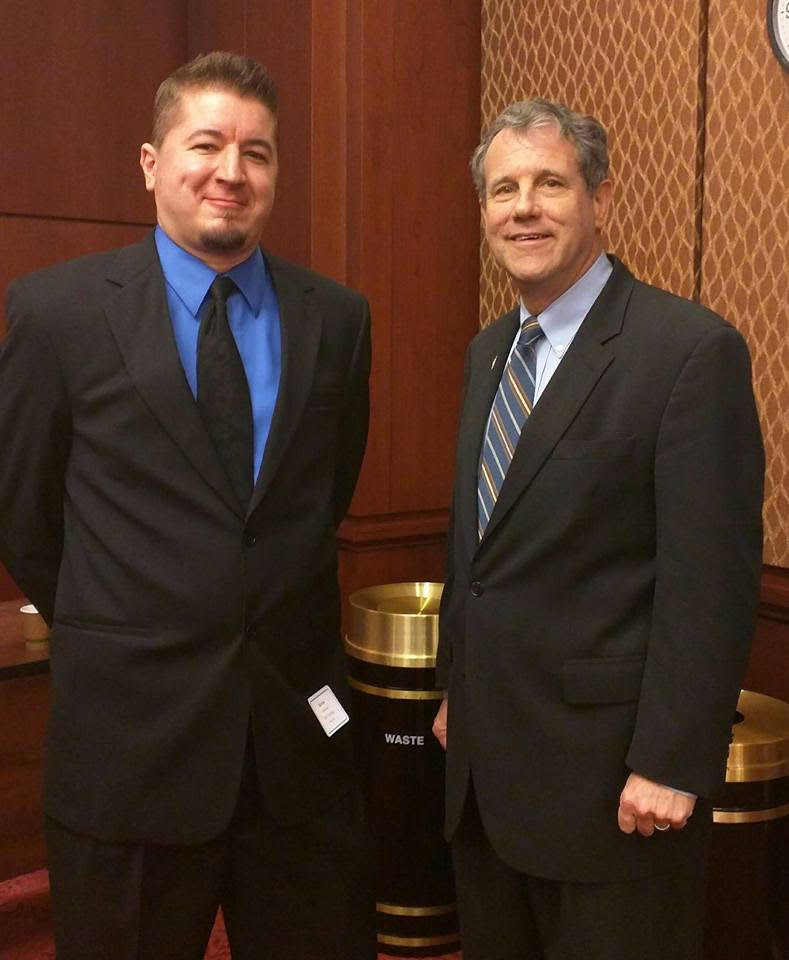 It was my choice, because they, my daughter Pamela and my son–in-law Tracy Drake, kindly ask me where I wanted to go, my choice was Marina Jacks restaurant located on Marina Bay. So on Saturday after my birthday we three pile in Tracy’s van and away we go for a 20 minute drive.

Marina Bay by Marina Jacks is where I found that big sailboat with the young captain and his wife as mate that I chartered for a five hour party celebrating my daughter Susie and Terrell Smith’s wedding so many years ago when I lived in Venice. I wrote a blog about it.

Their so nice valet parking allowed us to drive right up to the entrance and we all walk in, me with my walker (no wheelchair). It was quite a walk through until we got to the outside where we were seated at a table shaded by an umbrella on the intra-coastal water way. BEAUTIFUL SPOT! 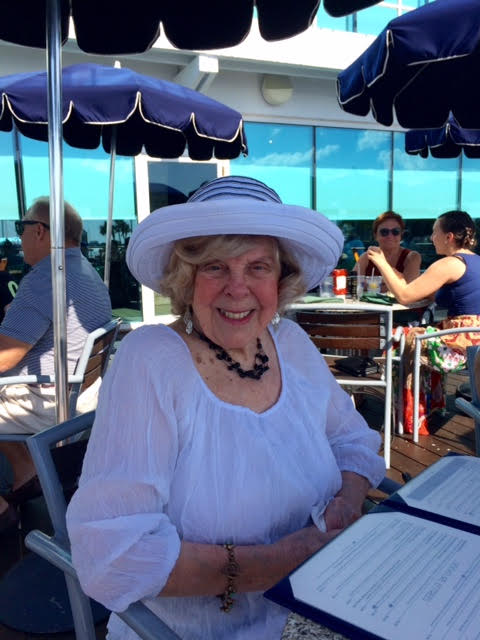 Pamela took the above photo of me with her iPhone

Tracy and Pamela each ordered a cocktail but since I had a glass of white Zinfandel wine before  leaving home, old lady me dare not drink anything but refreshing water.

Tracy ordered Oysters Rockefeller with a side salad, Pamela wanted a side salad with grilled grouper and French fries. And for my 94th birthday 2:30PM lunch ( it is too much for this old lady to go out to dinner) I ordered my favorite coconut shrimp with a side salad. YUM!! Yum!!. Marina Jack’s chef made the best coconut shrimp I have ever had. A delightful surprise to savor the flavor.

Then just when I thought we were about to leave……. on my left side our waiter on the table in front of me, placed a slice of Key lime pie topped with whip cream, a little lavender orchid and a candle that he lighted and they sang happy birthday to me right there in the restaurant and I blew out the candle. With the three clean forks he placed on the table we had each tasted but were too full to finish. I ate that at 1:30AM orchid and all. This old lady never goes to sleep until well after midnight!

Oh but the celebration isn’t over because when we get back home my daughter Pamela brings a coconut cake to the table, lights the six candles and they sing happy birthday again. We each have cake with Breyers strawberry ice cream and how nice, they gave me a big bag filled with gifts. It just keeps on getting g better!

There is a new lamp for my bedroom, a pretty dressing gown, a box of cards to mail greeting to my friends and family, and bag of Lindh chocolate covered coconut cream truffles. My favorite!

How some ever………I have a treat for you as my finally, have a look see at my family ready to attend this years Deer Creek Halloween party. 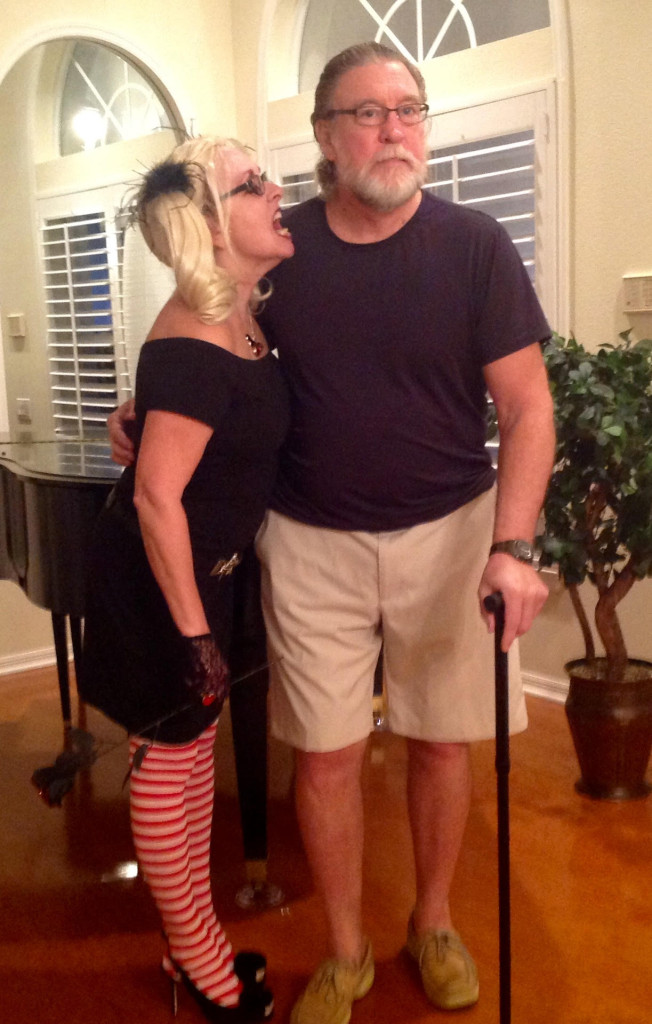 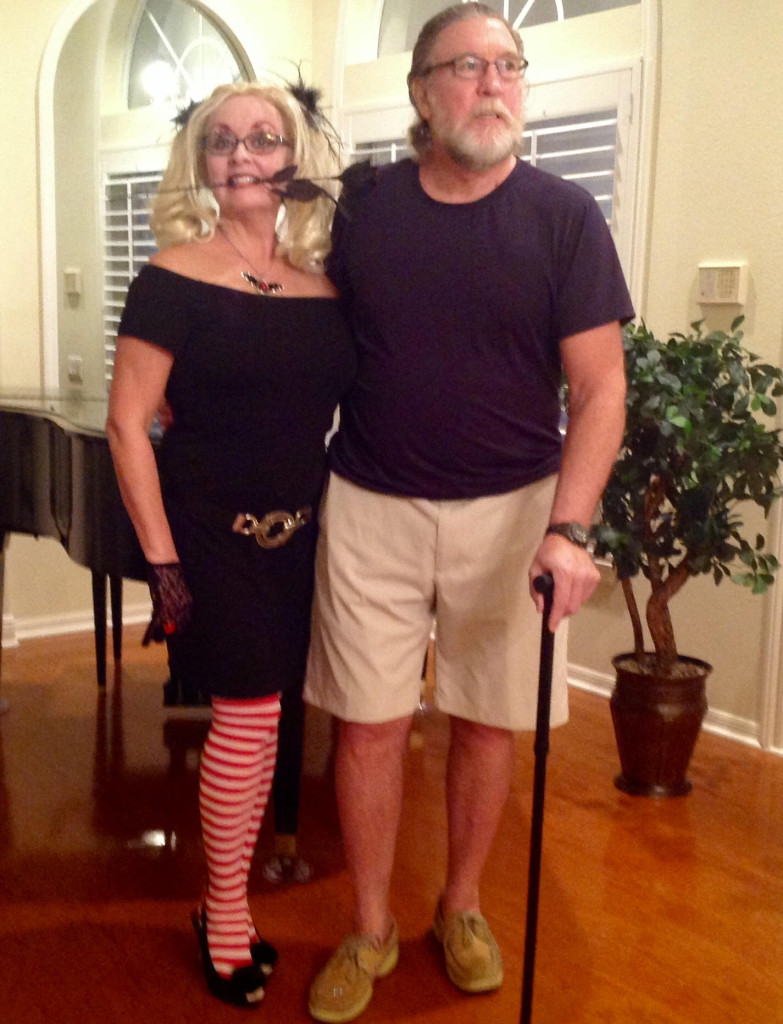 My daughter Pamela and her husband Tracy Drake. He is walking with a cane because he just had a hip replacement. How you like that light blond wig???????

Why don’t I feel old? I use a walker to get around. When family take me anywhere it’s in my wheelchair. I can’t do many things that I did when I was younger. But if I don’t look in a mirror I even think I look young! Maybe that is natures way of keeping us old folks happy! Go away mirrors!!!!!!! 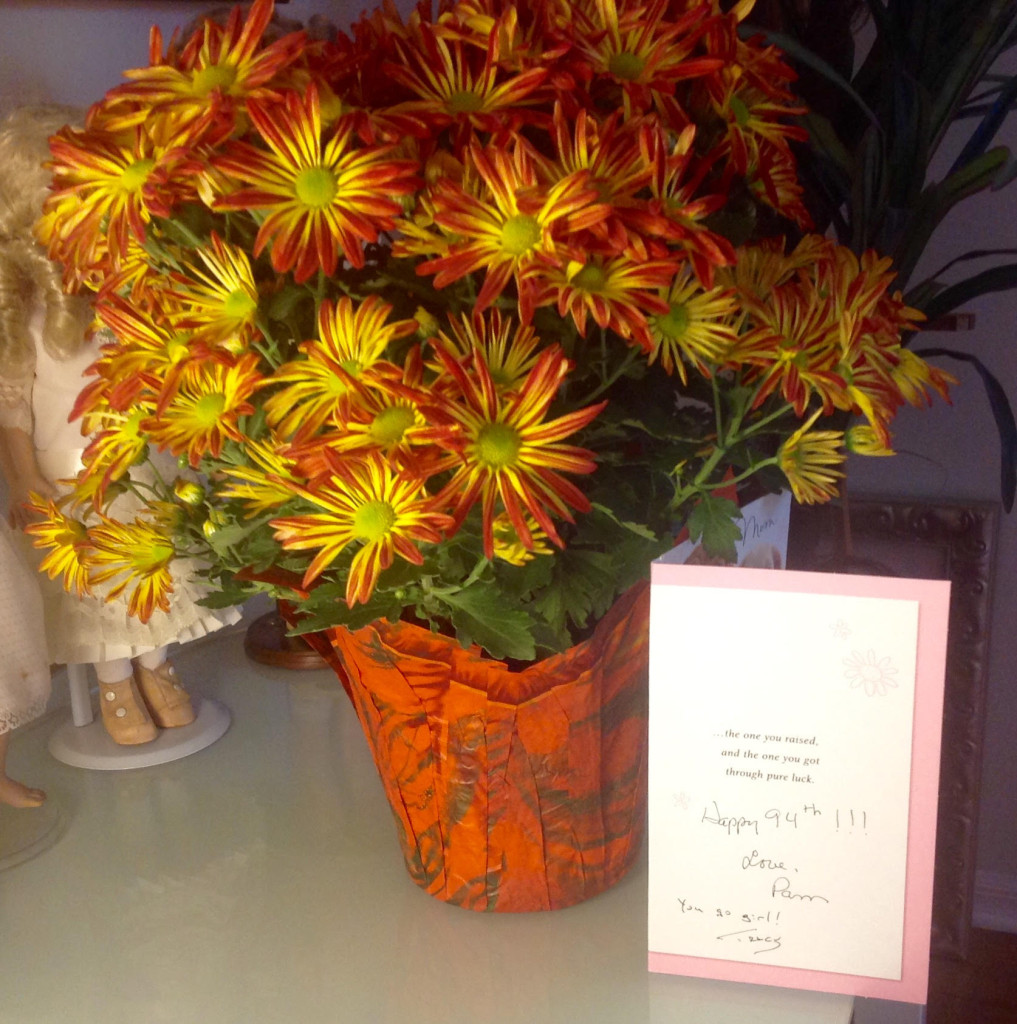 Flowers and card from my beautiful daughter Pamela and her husband Tracy Drake who I now live with in their home in Deer Creek community Sarasota Florida. I’m very lucky!!! My faithful always there for me niece Peg Eastman My wonderful Venice Bird Bay friends Tom and Debbie Winters who spend summers in their Tomahawk Wisconsin home on the lake.. 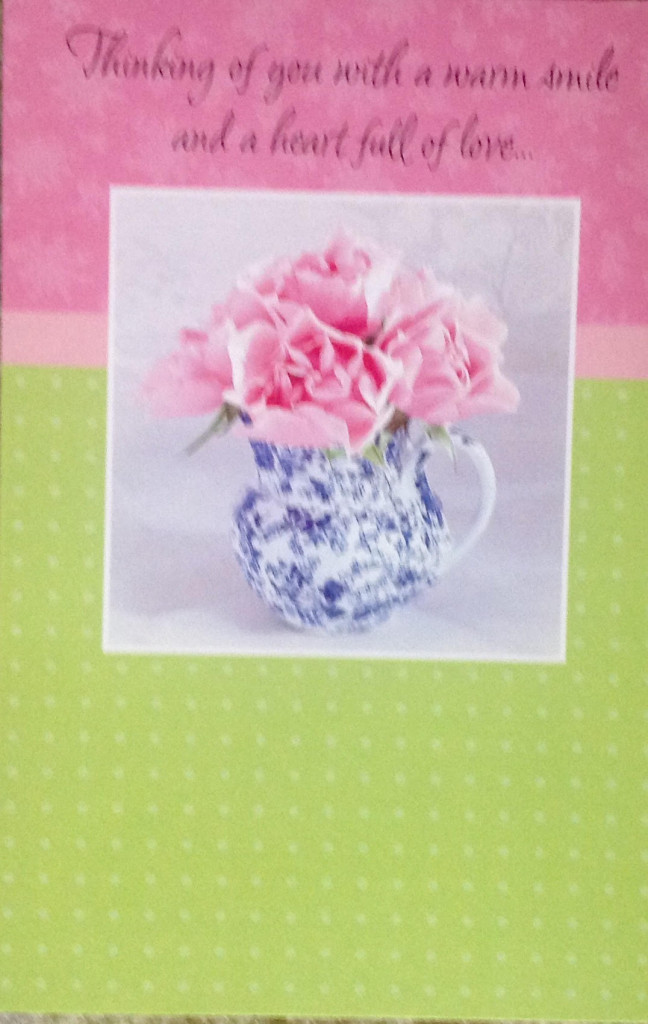 My nephew Steve Gardner and his lovely wife Karen 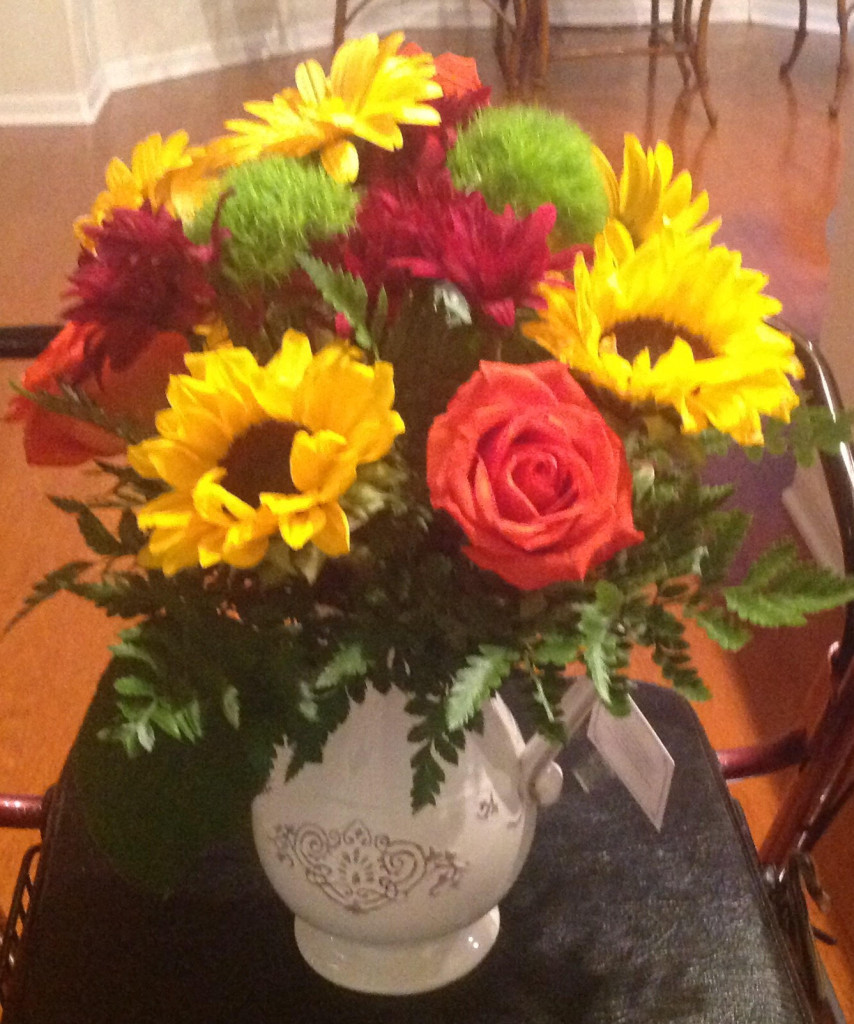 From my beautiful granddaughter Sarah Drake. So thoughtful and sweet of her 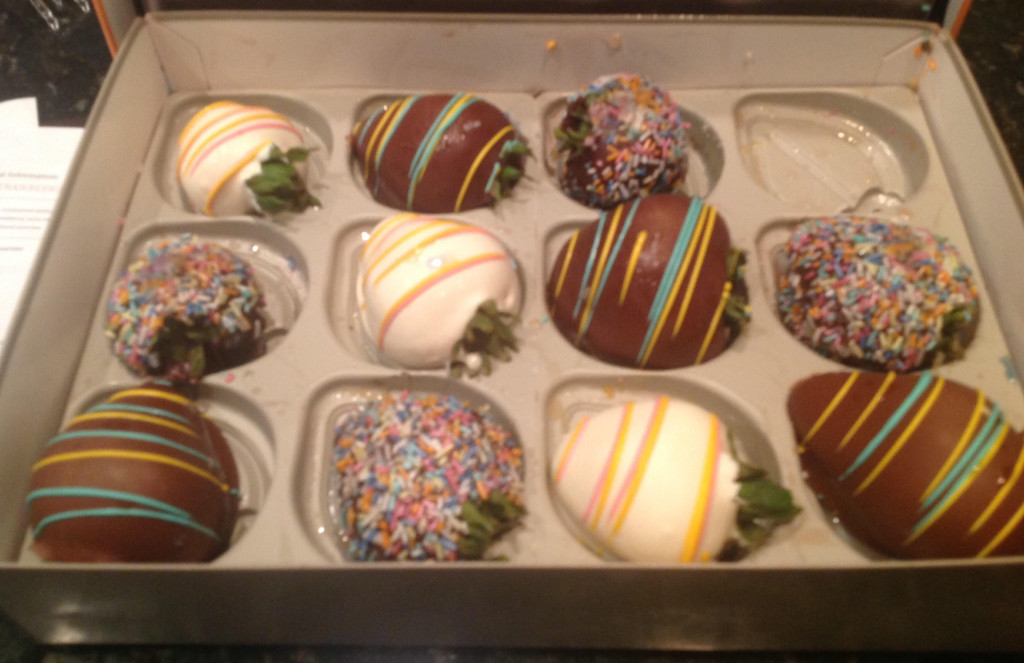 Candy covered strawberries from my dear friend in Ohio Lisa Ellyson. I already ate one YUM!YUM! And…what a lovely surprise! A two page letter included from my niece Jean Patrick Kraus! And here is a paragraph included in that letter……she wrote

I think you have led the most interesting life of anyone I know and you have done it all by yourself. Very gutsy lady!