Do you remember how many celebrities or VIP’S you have met in your life time so far?

My daughter Susie (Carole Suzanne) had driven to the Chicago O’Hare airport to meet her sister Pamela as she came in from Columbus, Ohio to spend the summer between junior and senior years of High School. While waiting for Pam’s luggage at the baggage claim, Susie noticed a celebrity. She quickly took a note pad and pen from her purse and ran over to him. Holding the pen and pad out to him she said, “MR WILLIAMS, may I have your autograph please?”

He kindly took them, promptly signed his name and with a smile handed it to her, and left. So happy with her accomplishment, she watched as he walked away, then looked at her prize! On the pad in beautiful hand writing he had written ANDY GRIFFITH!!!!!!!!!

You may remember the famous singer ANDY WILLIAMS. Well now, you gotta give her credit. She had his FIRST NAME RIGHT!!!!!!!!!

I wonder how many movie stars would have reacted as that sweetheart of a gentleman ANDY GRIFFITH did with my daughter that day.

The only way I met the movie star Lee Marvin was at the Kona Coast hotel on the big island of Hawaii when I was running along a sidewalk in the rain looking down and he and his lady friend had to step off the side walk so I wouldn’t run into them!
OOPS!!!!!!! EXCUSE ME PLEASE!!!!!!!

After visiting my daughter Susie and her family in Chicago, as I was waiting in O’Hare airport to board my plane, an attendant said to me, “If you look over there against the wall, you will see them putting GOVERNOR REAGAN on your plane. He will be in the first row on the right.”

When I entered the cabin of the Allegheny flight to Pittsburgh, sure enough there he was big as life right there in the seat to my right. I stopped, holding up the line, looked at him with the best smile I could muster and said, “Governor Reagan, YOU JUST MADE MY DAY”. He returned my smile but didn’t say anything.

He was going to Pittsburgh to meet with men who wanted him to run for President. Allegheny planes had no first class section so he got stuck with all of us in coach. Just before we landed Governor Reagan heads for the rest room in the back of the plane. Can you believe he has to walk from that front row seat to the very back of that plane. And again as he walked past, I got a big smile from him.

After he became President he often used the phrase “MAKE MY DAY”. I told my family, “See there! Your mother gave him that phrase!” But of course it was Clint Eastwood who made that little saying famous! Oh well, one for the GIPPER!!!!!!!!!!!

Airplanes and bars are often frequented by celebrities. While in a Niagara Falls lounge, my son-in-law Tracy met Stellan Skarsgard. He told Tracy that when he went to Greece to make the movie MAMMA MIA, he took all his family and it cost him almost all he made in the movie. What a generous man! 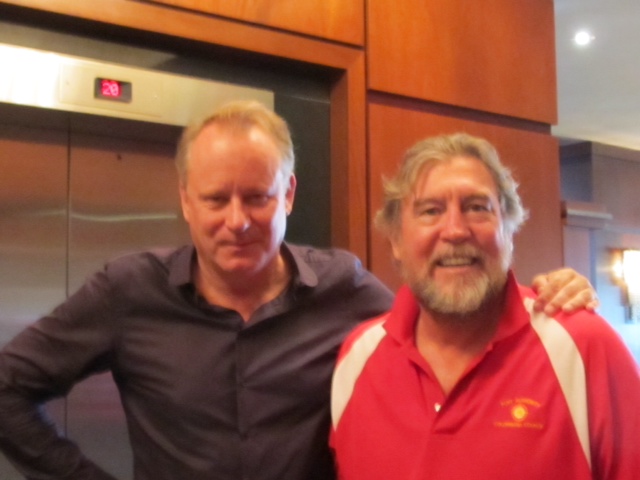 Flying from Atlanta to Pittsburgh, the lady sitting across the aisle in the row ahead of me looked vaguely familiar even though her hair was in a very casual style that I had never seen her with on TV and she was wearing faded blue jeans and shirt. I leaned across the aisle and said, “Are you Donna?” She turned around and said, “Yes.” I then had a very pleasant little conversation with the Democratic strategist DONNA BRAZILE whom I had admired on TV. She is a lovely gracious lady.

After being married in the Hawaiian Wedding Cave and honeymooning at the ‘Plantation” where the SOUTH PACIFIC movie was filmed, we had to ‘Island Hop’ to Honolulu for our International flight back to the US mainland. While staying overnight we attended the ‘DON HO” dinner show. This was in 1972, so perhaps I should tell you he was a famous Hawaiian singer!!!!!

While enjoying our dinner before his show started, I had been telling the guest at our table about our wedding in the Hawaiian Wedding Cave.

Then ‘DON HO’ comes on stage, greets everyone and says “HOW MANY GRANDMOTHERS DO WE HAVE HERE TONIGHT?” Several hands went up! I wasn’t about to admit I was a grandmother after just telling them about my beautiful wedding! And then he followed with, “All you Grandmothers come up on stage and get your picture taken with me.”

I jumped up from the table and made a ‘Bee line’ for the stage. I really was a FORTY-NINE year old Grandmother!

See my hands behind my back??? Next in line, I walked up to him, placed my hands on his shoulders and leaned in to kiss him.  Hardly moving his mouth, very softly so the ladies behind me couldn’t hear, he said, “Get your hands off my white coat!”

Don Ho was famous for the song “TINY BUBBLES” that goes as such:

Sorry! That is all this NINETY-ONE YEAR OLD CAN REMEMBER! Can you maybe help me ????????