We were loading yearling steers to take to market. All went smoothly until this last steer had made up his mind he was not going on the truck with the others we had already loaded. Each time my husband and I had him going up the loading plank, he would leap over the side rail and run back into the field.

As I was chasing after him, for the umpteenth time, and had listened each time to how it was all my fault, well…………I just lost it!

I stopped in my tracks, with tears streaming down my cheeks, looked up into the sky and said aloud, “Don’t you ever again try to tell me you are up there……because…….. I – know – you’re – not!”

A ghost like face appeared in the sky and said, “If you don’t believe I’m here, who do you think you are talking to?”

Had God just talked to me?

I ran after that steer with determination and he walked right up that loading plank and onto the truck with his fellow steers.

It was hard to resist telling someone what had happened. But who would believe me if I said to them that God had talked to insignificant me? They would think I had lost it for sure (and they might be right). They might even have had me committed. Oh no, I can’t take the chance.

A couple days passed and I couldn’t stop thinking about it so I decided to write it down so I would have it for future thought. I’m writing along and come to the part, “Who do you think you are talking to”. That’s incorrect grammar. It should be, “To whom do you think you are talking”. It’s like when Winston Churchill wrote a paper that was edited by a young man. He said to Mr. Churchill, “You made a grammatical error. You ended a sentence with a preposition.” To which Winston Churchill replied, “This is the sort of nonsense, up with which I will not put!”

I surely am glad I never tried to tell anyone God had talked to me. I would have been laughed out of the room.

A similar happening was after I lost my precious daughter from cancer. I had been in the Lawrenceville, Georgia hospital sitting by her bed and holding her hand for many hours until she took her last breath. And I also had attended her wake and funeral service along with my children and grandchildren, and had sat by her casket at the grave site.

My other two daughters and their families joined me going to the Atlanta airport where we each boarded planes to our homes.

Now I’m back in my condo home in Venice, Florida sitting on my sofa. As I look out to my lanai there is a cloud-like figure of my precious daughter sitting in a chair. For a few days every time I sat there on my sofa she was there in that chair on my lanai looking at me. A ghost-like figure she just kept looking at me.

I didn’t know what to do. I had to get her out of that chair. Have you ever heard the phrase, “The little man who wasn’t there, he wasn’t there again today, oh how I wish he would go away”? I’m sorry I can’t remember the author.

Then it happened! One day as I’m sitting there on my sofa watching her she stood up, smiled as she walked past me, went through the dining area on toward the front door and then she just vanished! Disappeared! She wasn’t there anymore.

I believe I had never accepted her death and it took a while for me to let her go. It is difficult to almost impossible for a mother to lose a child. When her heart stopped, my heart broke. I’m now 91 years old and still have no real answers for any of these happenings. 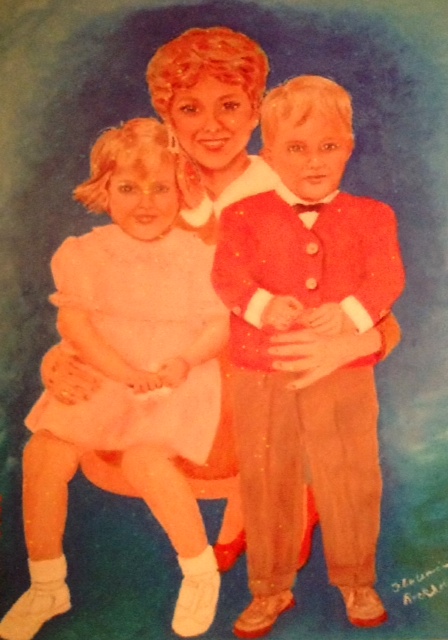 Portrait of my daughter and her two children